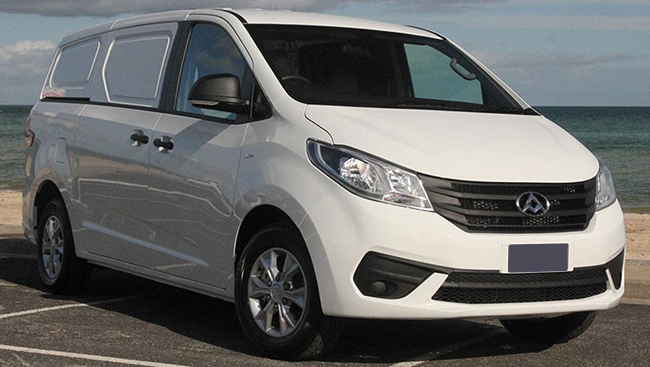 The Chinese brand has a snappy price and is challenging the more well known vans with a new and fresh model. The G10 van is decent upgrade on previous V80 model.  At the time of writing it was unclear whether the G10 would achieve a higher safety rating than its predecessor, which scored a two-star ANCAP crash test rating.

At a price point of around $30,000 for the automatic version (as opposed to $25k for the manual), the LDV G10 represents decent value in comparison to the Hyundai iLoad, Toyota HiAce and the Ford Transit, which command a higher price, and that is before road costs are included.

LDV seem to be hoping that adding a few extras that come standard will attract buyers who are largely unfamiliar with the brand. To this end they have included 16 inch alloy wheels, rear sensors for parking, reversing camera, central locking, cruise control functionality, entertainment console including bluetooth connectivity for both audio and phone, together with electric windows.

While that is a considerable list of features, a glaring omission is a diesel engine. Indeed only a small percentage of Hyundai iLoads have petrol engines while Ford offers a diesel only option. While a diesel option is apparently in the pipeline, it doesn’t appear to be a priority for the LDV G10.

According to one review, the lack of diesel engine option is a huge error of judgement by the Chinese car maker.  However, when put into the context of how the G10 evolved, it may just make sense. The van  was originally designed a s people mover then reconfigured  to move cargo.

The 2.0 litre engine, supposedly original  according SAIC, puts out a more than satisfactory 165 KW and 330 Nm. Despite the reviewers testing the van when empty, it was still reported  to be pacey enough.

For a commercial vehicle it was felt that the G10 was refined and comfortable. The Chinese transmission performs excellently with a six speed ZF torque converter automatic. Officially, consumption of fuel is listed at 11 L per 100 kms and this was confirmed in trials that have been reported with no load on board. Compared to diesel, this is relatively expensive, and these costs should be factored in when considering a purchase.

While a verdict can’t really be reached until the van has put in a few years on the road, initial impressions are that LDV have really upped their game.