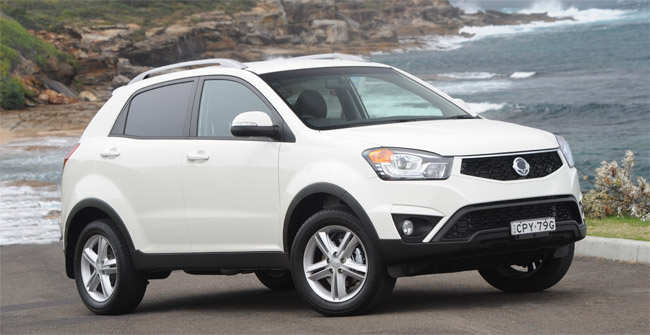 Not only is the small SUV market in Australia one of the fast growing but it is also one of the most competitive right now. Customers have a massive variety of choices to consider when buying a small SUV in the county and this is a big reason why some of the smaller models and manufacturers such as the Ssangyong Korando are often overlooked.

The previous version of the Korando was brought out in 2011 and ran until last year without making a dent against more established and popular models such as the Hyundai ix35 and Nissan Dualis. This was despite being very competitively priced and having some fantastic lines after being designed by Giugario.

The new generation of the Korando was released last year and it featured an all-new interior and a redesigned frontal design. The range was a also trimmed back to just two variants, one which is a two wheel drive that has a four-cylinder 2.0-litre engine and another that is a four wheel drive four-cylinder 2.0-litre turbo engine. The first is available at $27,990 whilst the second can be had for $5,000 extra at $32,999.

Ssangyong have gone down the path of outsourcing the design of their models in recent years and if you remember some of the manufacturer’s older models you will probably understand why. The design of this latest Korando is vastly improved to what has come before it, with it looking edgier, sharper, and definitely more stylish.

Once you get inside the car you will be pleasantly surprised too as the newer model has had a severe facelift. There is ample space in both the front and rear and everything has been made with a strong ergonomic backbone and feel. The front seats are leather and are heated as standard while the finish around the interior is that of faux woodgrain.

As for the equipment and features on the revised Korando, these are fairly adequate for the price that you would be paying. One exception is the lack of any kind of touch screen for the media system which is a bit disappointing.

The heated front seats have already been mentioned but these are joined with standard features such as climate control, rear parking sensors, auto-folding side mirrors, silver roof rails, keyless entry, and phone and audio streaming that can be done through Bluetooth.

The safety equipment for the Korando is pretty standard as well with six airbags, two child seat anchors, hill assist, and rollover mitigation. As of right now there has not been an ANCAP crash test rating for the vehicle but we would imagine that this will be rectified very soon. While it would have been nice to have seen some additional safety features, those offered are standard among all other small SUV’s at this price range.

Although the obvious facelift in both the interior and exterior design of the Korando and a few feature additions, it is hard to see where they justify increasing the price tag of the new version of their small SUV. The wheel drive version is $4,000 more than its predecessor whilst the four wheel drive is $2,000 more.

Had they have kept that same sharp pricing it really could have competed with and perhaps even topped some of its rivals. As it is however, the Ssangyong Korando has once again fallen just a little bit short.