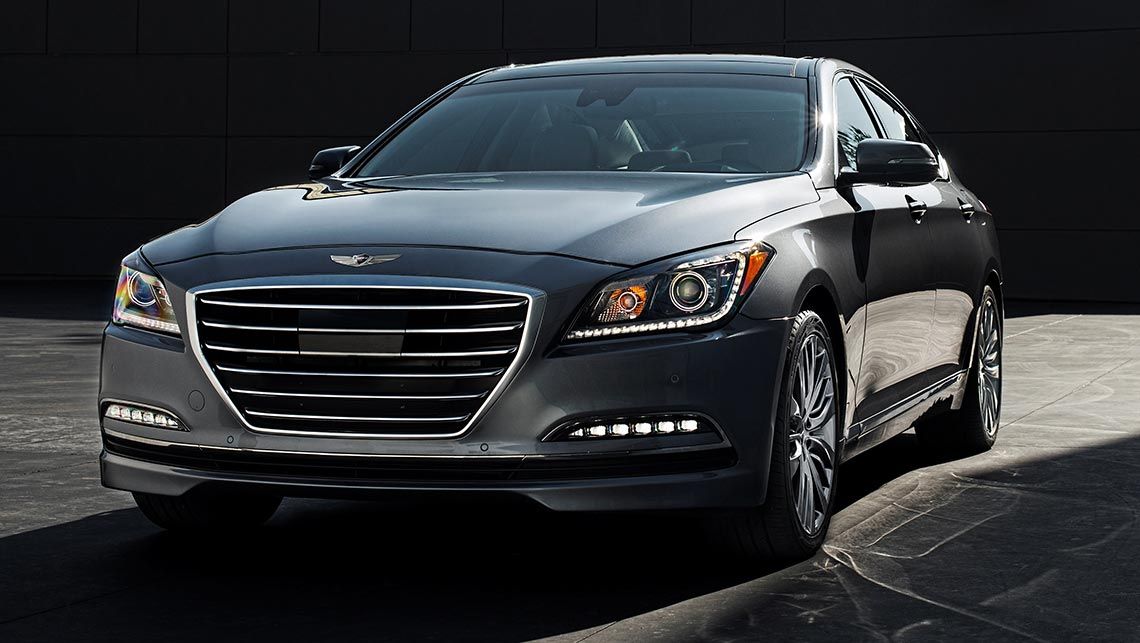 Usually known for offering value for money and little else, Hyundai have embarked on changing this image with their more upmarket Genesis range.

The car has been available in many other countries for the last five years but due to having the steering wheel on the left, it never managed to make it to Australia. The second generation of the Genesis has seen Hyundai switch to catering for both left and right handed countries which means the Genesis can finally come to Australia.

The Genesis will be competing with the likes of the Audi A6 and the E-Class Mercedes Benz, so it will have to provide something special to do so. It is certainly bigger than both of those models and is thought to be priced at less than its competitors but just what else does it have to offer?

Two words that would disrobe the Genesis would be conservative and sleek. They have decided to tone down the more radical looks that are seen in other Hyundai models but this look fits right in with the upmarket image they are trying to promote.

Hyundai have implemented a new single piece grille, a grille that is to become a mainstay in all future Hyundai in the range. From the side you will notice some nice curves that almost project an image of the Genesis being a four door coupe, yet despite those curves at the rear there is still plenty of headspace. From the rear, the Genesis looks very wide and powerful and adds to the styling with a built in spoiler tip.

We feel one of the biggest selling points of the Genesis will be the interior. The quality of build is plain to see whilst the styling really does impress. The interior is decked out with leather seating, real timber elements and a scattering of suede and aluminum.

There will be no choice of engines for Australians unfortunately with the 3.8 litre petrol V6 being the one and only. This engine offers more than enough performance though with it generating 235 kilowatts of pure power and a very nice 400Nm torque. As for the transmission, it is delivered by an eight speed automatic gearbox to the rear wheels.

Buyers of new cars know that safety is one of the most important considerations when choosing a make and model and the Genesis has plenty of features to help persuade them. There are a number of crash avoidance features such as all around electronic vision, cruise control and an automatic emergency braking system.

Another prominent feature is that of the Genesis using satellite navigation to help protect your driver’s license. It will know where there are fixed speed cameras and will take it upon itself to automatically slow down your car until passed before returning to its original speed.

Once in the Genesis you notice good levels of seat comfort both in the front and rear. The rear also provides plenty of legroom and there is ample space for three to be seated comfortably.

The central armrest at the rear is where all the fun begins for the passengers. Once folded down it reveals a whole host of functions such as being able to adjust the ventilation and even change the settings for the satellite navigation system. There are also flat screens embedded in the back of the front seats.

Once powered up the car sounds great. The 3.8 litre engine provides a meaty sound through its exhaust and is also very responsive. In fact the sound actually gives the impression that the engine is far less conservative than it actually is.

The body has been put together well and is strong, which helps to prevent any rattling noises and vibrations. The car grips very well and the car has a nicely balanced feel when driving though there is a little understeer when really attacking some bends.

It is certainly a brave move by Hyundai to try and covert their image from that of being a value-for-money brand to that of one that is known for producing more high-tech vehicles for the affordable family car market.

They have definitely timed this bold move well too, with the future withdrawal from the affordable family car market of the Holden Commodore and the popular Ford Falcon. This has left a nicely sized gap for the Genesis to take advantage of, an advantage that we really do hope they are successful in taking.