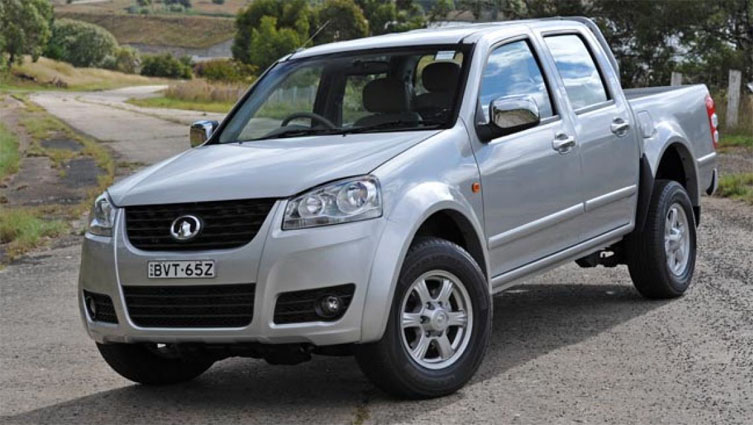 If you can cast your mind back to the original Great Wall diesel 4×4 dual-cab ute, you will remember that it was certainly a little rough around the edges and far from being an aesthetically pleasing vehicle. Since then, they have revised this model along with the SUV, to give and end-result that is a lot more pleasing for any future customers.

That revised model includes a new and refined 6-speed manual transmission inside a 2 litre turbo diesel engine that enables it to compete with its closest competitors.

Additionally, the long throw gate mechanism has been improved from before where it was located far too far away from the driver. This not only means it is easier to operate but it also improves the overall feel of the vehicle when it is being driven. The engine has also seen some tweaking, giving it better response and improved fuel economy. The only annoying thing left with regards to the engine is that it now seems to drop in revs every time that you change gears.

These changes have certainly brought the Great Wall a lot closer to its Japanese competitors but it is still a little bit short of them it has to be said, especially with regards to the performance of the engine.

So What About the Value?

With everything above kept in mind, the key factor will no doubt be the price at which the Great Wall V200 can be purchased for and this is where it stands out against its competitors. You can pick one up for $27,990, which as you might know, is many thousands cheaper than a similar spec Japanese ute. So while it cannot quite compete with them on engine power and refinement, it certainly puts them in the shade when you consider bang for your buck.

You can imagine the sort of difference in cost for your monthly lease payments if you had a fleet of the Great Wall rather than that of one of its biggest competitors. It is for that reason that these V200’s are literally flying out the door.

You do not only get the basics either, as there is quite a lot of kit included in that price too. You get aircon, power windows, leather upholstery; allow wheels and even audio controls embedded in the steering wheel. If you were to get a similar spec BT50 and add those extras, you would be looking at paying almost $50k for the ute.

While it will not pull up any trees, the ride of the Great Wall V200 is actually very good, even when it is unladen. The performance of the engine is adequate without being spellbinding whilst the fuel economy is comparable to its competitors too at 8.3 litres for every 100km.

It is very similar in size to many of the Japanese models, has a decent amount of space and can carry a load totaling 1 ton. As for towing capacity, it can pull a trailer loaded up to around 2 tons which is not too bad.

For safety, the V200 has front airbags and ABS brakes which would certainly not be enough to get it a five star rating, to achieve that it would need additional airbags and probably stability control too.

The Great Wall has done a great job of seizing its spot in the market. It is the perfect option for a new or upcoming business as the money that is saved can easily be spent elsewhere. While it is cheap, it really is not ‘too’ cheap if you understand where we are coming from. The specs might be slightly less than its competitors but as a package is the V200 really worth tens of thousands less than them? Certainly not, what you get is great value for something that is not too far away from what the Japanese manufacturers have on offer.