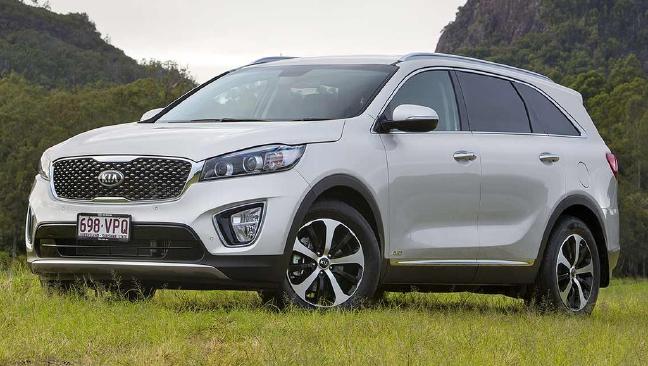 The new Kia Sorento has arrived just in the nick of time it would seem, what with the old model having fallen right down the pecking order when it comes to the 7-seater class. The previous model was seen as being as much as half a generation behind many of its competitors such as the Hyundai Santa Fe, Toyota Kluger, and Ford Territory.

Usually known as the cheap and cheerful option, Kia looks to be moving a little bit further away from that reputation with this latest model and they hope that this 7-seater will further improve the manufacturers climb up the sales charts in Australia.

Design
The new Sorento comes bigger, longer and lower than its predecessor and looks similar in style to Kia’s Carnival. The interior has seen somewhat of a facelift, with the quality having been improved to offer a more up market and quality feel.

The Sorento carries three power points in each of its versions as well a couple of USB ports, bottle holders that can be found in each of the doors, and it has replaced the central manual handbrake with an electrical one that frees up some additional space in the centre console.

There is more space inside the Sorento too mainly due to the extra length of the 7-seater. Storage space can be adjusted due to all of the seats being foldable making the Sorento extremely customizable depending on the number of passengers and the amount of luggage space required.

Value
The value across the Sorento range has increased by between $2,000 and $4,500 and the total selling price is between $40,990 and $55,990 across the versions. These gains are justified by improved standard equipment across each of the versions such as satnav, reversing cameras and parking sensors being standard features even in the base model.

The SLi and Platinum models have added features such as leather trim and an electrical tailgate whilst a panoramic sunroof can be found only in the latter.

Under the Hood
Likes its predecessor, the Sorento gives customers the option of petrol or diesel with the former being a 3.3 litre V6 engine that was first used in the Carnival that was released earlier this year. The diesel option provides a 2.2 litre, 4-cylinder turbo-diesel engine and is the only engine of the two that allows for 4WD.

There is no manual transmission option this time around for all versions with a six-speed automatic instead becoming the only option. Fuel consumption has increased slightly for both engines as the petrol requiring around 9.9 litres per 100km and the diesel requiring 7.8 litres for the same distance.

On the Road
Seven-seat SUV’s have always rather oddly been designed to handle on rough terrain despite most customers purchasing them for use on the roads. The Sorrento has decided to change this ethos with the latest model and has made marked improvements to its handling on the roads, around bends and at speed.

These improvements have been at a slight sacrifice to off-road performance but the Sorento still scores quite high their too. It is certainly not as smooth as some of its competitors but Kia have realized that the majority of their customers will be families rather than thrill-seekers.

As for safety, the Sorrento is proud to announce that it has been awarded a 5-star ANCAP safety rating across all versions, which is an improvement on its previous model that only achieved this on its diesel versions.

All versions have dual-front, curtain, and side airbags as standard whilst the premium offers safety features such as departure warning, blind spot monitoring and a very handy adaptive cruise control.

Summary
The new Sorrento might be a bit more expensive than its predecessor but the improvements in safety, handling, design, interior, and features certainly makes it worth the price hike. In fact the new Sorrento has to be up there as one of the very best 7-seater SUV’s that are currently on the market and when you add in the 7-year warranty that Kia are throwing in, it seriously has to top them all.